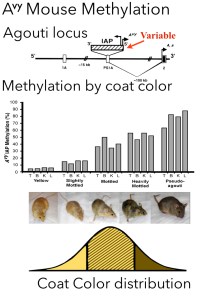 Transposons make up the vast majority of mammalian genomes. Traditionally these genomic elements were derided as “junk” DNA. Recently some groups have concluded that up to 80% of the genomic “dark matter” is transcribed and therefore functional. More likely is that the majority of transposons are indeed the remains selfish genomic parasites. Their impact on sculpting the genome cannot be underestimated. However we are beginning to understand that their influence on gene expression may be just as important in evolution.

My research in the area of mobile DNA is to determine the prevalence of epigenetically labile and active transposons. A number of transposon-associated alleles exist in mice that are interindividually variable, causing dramatic phenotypes. We expect there are many stealth-drivers of gene expression differences to exist in the human population. Though a particular transposon may fixed in the population, the associated epigenetic marks may have been altered by the environment, causing downstream effects.